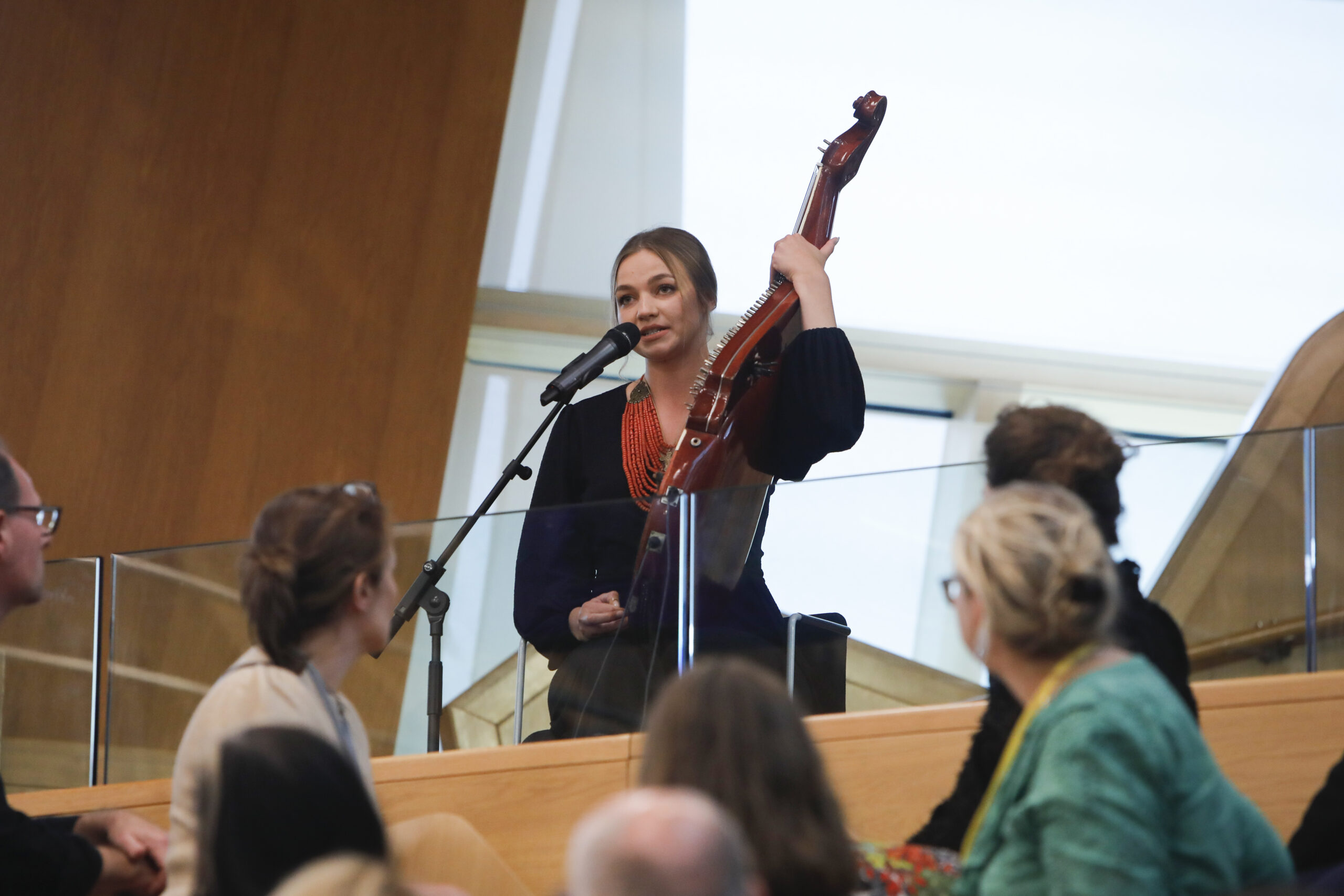 When I was a music student in Sydney in the 1980s, our tight-knit group was augmented in second year by the arrival of a larger-than-life musician named Viktor. He was accompanied by a strange instrument whose identity was obscured by its travel case; its shape and size being entirely unfamiliar. Was it an overblown French horn? Some strange, gigantic lute? Or a pair of colossal cymbals?

In revealing this instrument, Viktor forced a bunch of laidback, complacent Australian teenagers to confront the inconvenient truths and uncomfortable situation of artistic censorship and suppression. He revealed the dangers associated with playing the bandura. The very notion of being censored or worse – seriously injured or killed – just for plucking a few strings on a plank of wood, was simply beyond our comprehension.

Viktor reminded us of the privilege of studying, composing, and playing music in a free and open society; of the responsibility we have as artists to bring hope to humanity through sharing everyone’s birth right – music. He challenged our reasons for wanting to be musicians. He played music to express, to preserve and to live within his language, customs, and cultural inheritance. To feel free.

What were our reasons for wishing to be musicians? It is a question that continues to resonate with me today.

Summit 2022 co-hosts a Cultural Leadership Dialogue with the Ukrainian Institute. Even the preliminary preparations for the Dialogue are proving to be highly charged with emotions. It will be a rare opportunity to listen and learn. And to consider the importance of culture and identity in the lives of individuals in myriad places throughout the world. To take some lessons from Ukraine to other countries, conflicts and cultures.

Over the past decade, ministers of culture from over 70 different countries have contributed to the Culture Summit in Edinburgh.

Previous Summits have invited a diverse range of artists to address a broad series of issues of relevance to the cultural sector under the titles of; Culture as an International Dialogue in 2012, Culture – A Currency of Trust in 2014, Culture – Building Resilient Communities in 2016, and Culture – Connecting Peoples and Places in 2018, and in a special digital edition in 2020 – The Transformational Power of Culture.

Some of the most memorable moments include; Indian craft historian Jasleen Dhamija reflecting on the genius of the unlettered mind in a world of woven wonder.

Xanana Gusmão, having returned from years of exile and just been elected the first President of East Timor, saw his role to build a community, where none existed. Without confidence and hope nothing could change, and nothing was likely to endure. As a poet, Xanana perceived that an essential and rather direct route to achieving confidence and optimism might be found in the traces of one’s art, painting and sculpture, the pulses of dance and music, the spectacle of opera, the fantasy of poetry and the conflicts of drama, and within the rituals of one’s religious beliefs.

Maamoun Abdulkarim arrived at Summit 2016 in the most traumatic circumstances. His boss, the renowned Syrian archeologist Khaled Al Asaad had been publicly beheaded almost exactly a year earlier [August 2015]. His description of the way in which together they saved so many antiquities in the ancient city of Palmyra was both depressing and inspiring.

Choreographer Ea Sola touched our hearts with her homage to the ancient traditions of classical dance in her native Vietnam. She impressed with her extraordinary efforts to reassemble a group of women whose artistic futures as dancers in the Royal Ballet had once seemed so clear but had suddenly changed forever due to a devastating war.

Prince Amyn Aga Khan inspired us by describing the work of the Aga Khan Foundation across so many countries from Mali to China, and India to Uzbekistan. Prince Amyn revealed an enlightened approach to philanthropy – weaving together economic, social, and cultural interests as indivisible parts of a sustainable fabric of human society.

Neurologist Bas Bloem and his patient, violinist Julian Herman serenaded us in a most unusual way in powerful demonstration of the important and deep connections of medicine and music.

Theatre director Amir Nizar Zuabi described in forensic detail the daily obstacles of borders and guards – the petty obstacles to making theatre between Israel and Palestine.

Youssou N’Dour gave us a glimpse of what it was like to be both a global music star and a minister of culture – and how rare it is for celebrity to be put to useful purpose.

Architect Liz Diller in conversation with sociologist Richard Sennett offered practical ways to reimagine the adaptive reuse of redundant urban infrastructure using the transformative example of the Highline in Manhattan.

Economist Andy Haldane urged governments to give make serious investments in culture through education from pre-school, for the benefits of a range of mature and developing economies across the world.

Epidemiologist Daisy Fancourt provided abundant evidence of the positive impact of art on the health and wellbeing of people from childhood to old age.

When it was not possible to meet in person in 2020, our film crews were to be found in upstate New York with actor David Strathairn, in a makeshift outdoor rehearsal space in Rio de Janeiro with Deborah Colker and her dancers, at the Hollywood Bowl with Gustavo Dudamel, online between LA and Raploch with young musicians from California and Scotland, and to capture a message about happiness from the Queen Mother of Bhutan.

What are the lessons I take from these diverse and inspiring examples of artistic entrepreneurship, and cultural collaborations?

We live in a world in which knowledge comes not from a single omnipotent source – rather from hugely diverse social, cultural, ethical and technological sources and locations.

We have already begun to enter of a period in history where no single culture, ideology, theocracy, or politics will be all pervasive or dominant.

The abundant examples from artists, administrators, policy makers and politicians attending Culture Summits since 2012 suggests that we must learn from each other. By comparing best practices from wherever they might be found; by exploring how to adapt a great idea or innovative policy to very different contexts – to always keeping an open mind – most definitely yields social, health and economic benefits to every citizen in countless communities throughout the world.

The German sociologist best Ulrich Beck implores us “To have the courage to make use of one’s cosmopolitan vision and to acknowledge one’s multiple identities – to combine forms of life founded on language, skin colour, nationality or religion with the awareness that, in a radically insecure world, all are equal, and everyone is different.”

Summit 2022 coincides with the 75th anniversary of the Edinburgh International Festival – a celebration that owes its origins to a profound desire to rebuild a sense of community in a continent that had been torn apart by the tragedy of World War II; to offer hope and optimism to shattered lives, through the potent example of engaging with music, opera, drama, dance, literature, painting; and to pick up the fragments of a civilisation shaken to its core by atrocities such as Leningrad or Auschwitz.

On behalf of its other founding partners – the British Council, the Scottish Parliament and the Scottish and UK Governments – the Summit offers its heartfelt congratulations to the Festival on its success and resilience since 1947.

Like the Festival, the Summit exists to make the case for culture as an essential enlargement of the circumstances in which the citizens of every nation can imagine their lives; and to advocate for the inestimable impact of the arts on the vibrancy of the world we create now and bequeath for the future.