Complex role of Culture in Conflict 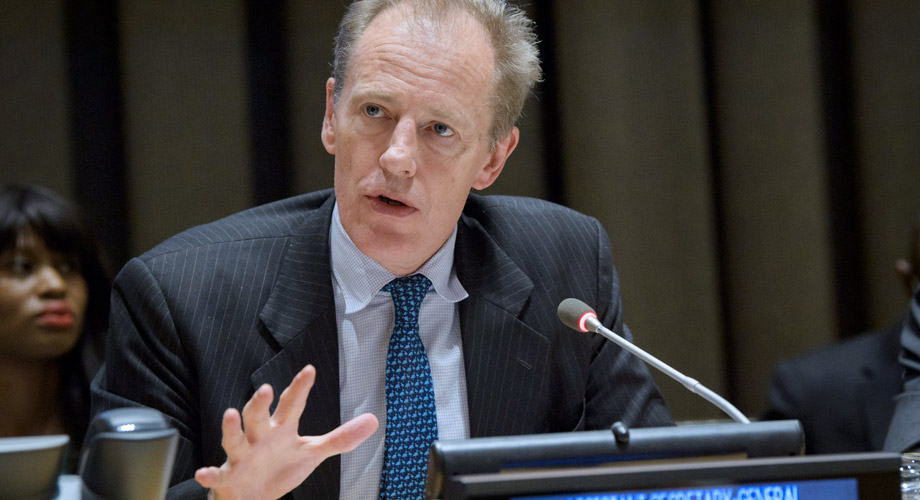 ON THE DAY when we met online to talk about his contribution to this year’s Culture Summit, Andrew Gilmour – diplomat, peacemaker, and private pianist – was moving into his new flat in Berlin, where he has just taken up the job of director of the Berghof Foundation, specialists in peace-making, conflict resolution, and the reduction of social and political violence.  After 30 years working for the United Nations in New York, and in postings across the world, Gilmour had not really intended to look for another full-time job; when he spoke to Holyrood magazine earlier this year, his semi-retirement plan was to spend much more time at his family home in Dumfries and Galloway, and to do some writing.

Gilmour is a profound believer, though, in the values of peace, democracy, human rights and the rule of law that underpin the United Nations Charter; in his last few years at the UN, he was Assistant Secretary General for Human Rights. So when the Berghof Foundation job came up, Gilmour – who is still only in his mid-50’s – felt it was a challenge he had to accept; and as usual, his piano had to come too, presenting the only real logistical problem in his move to his new Berlin home.

Andrew Gilmour makes no bones about the background of privilege against which he grew up. His father was Sir Ian Gilmour, a minister in two Tory governments; and his mother was Caroline Montagu-Douglas-Scott, daughter of the 8th Duke of Buccleuch.  Born in 1964, Andrew was their youngest son; and at school at Eton, and later at Balliol College, Oxford, he was an exact contemporary, and even a friend, of the current Prime Minister, Boris Johnson.

In a way that now seems, sadly, to belong to an earlier age, Andrew Gilmour’s father was nonetheless the kind of one-nation Conservative who believed strongly in public service, and was speedily dismissed from Margaret Thatcher’s cabinet for being, in her words, too “wet”; too concerned, that is, about the brutal human and social consequences of her policy of rapid de-industrialisation in Britain former industrial heartlands. Sir Ian later wrote a powerful book, Dancing With Dogma, about the negative impact of Thatcherite ideology on the Conservative Party he had known.

So it’s perhaps not as surprising as it might seem that Andrew Gilmour developed an early interest in human dignity and rights, joining Amnesty International at the age of 15, and running the gauntlet of being dismissed first as a rabid left-winger by his Eton schoolmates, and then as a wishy-washy liberal centrist by well-heeled socialists at Oxford.  After Andrew graduated in 1985, he joined the new Social Democratic Party, launched in 1981 by four leading ex-Labour figures, Shirley Williams, Roy Jenkins, David Owen and William Rodgers.  By 1988, he was helping to draw up the agreement for the historic merger between the SDP and Liberals, which created today’s Liberal Democrats; and then, after a brief sojourn at a Washington think-tank, he decided to make a career at the United Nations.

He experienced a baptism of fire in Afghanistan in the early 1990’s, when he was briefly held hostage at Kabul airport along with other UN officials; he also worked in Baghdad, in the aftermath of the Iraq War. The experience that left the deepest mark on Andrew Gilmour and his family, though, was his posting to Jerusalem in the early 2000’s, immediately after the outbreak of the second Palestinian intifada.  Andrew’s wife Emma Williams wrote a much-praised book about the agony of Palestinian life under occupation, It’s Easier To Reach Heaven than the End of the Street; and like his father before him, Andrew Gilmour felt a strong sympathy for the Arab and Palestinian situation, and for the daily assault on basic human and civil rights in the West Bank and Gaza.

Given the intractability of that conflict, and many others with which Andrew Gilmour had to deal during his time at the UN, it’s perhaps not surprising that, as he explains in his Culture Summit interview, he remains sceptical about the power of culture to heal conflict and to bring people together.  He observes that it can do so in some contexts. During his posting in Baghdad, he invited his brother, the orchestral conductor Oliver Gilmour, to visit the city, and to conduct one of the first major concerts by Iraqi classical musicians since the conflict; he himself plays piano, as a much-loved hobby and consolation. He is aware, though, that in conflicts ranging from the Second World War to the horrific 1990’s civil war in former Yugoslavia, music and the arts have often failed to play a positive role, and have sometimes even been used in ways that reinforce hatred and conflict.

“One thing I do believe, though,” says Andrew Gilmour, “is that art-forms like theatre and literature can sometimes play a vital role in compelling people to acknowledge that the enemy, the other side of the conflict in which they’re living, is fully as human as they are.  I think of the impact of a novel like Bernard McLaverty’s Cal, for example, which right at the height of the conflict in Northern Ireland, had the power to make readers see the world from the perspective of a young Catholic man caught up in the IRA; or Kurt Vonnegut’s Slaughterhouse-Five, which helped people in Britain and America to understand the full horror of the bombing of Dresden – which really was a war crime on every level – or Alan Paton’s Cry The Beloved Country, which alerted so many to the horror of apartheid.

“So yes, the arts can play a role in opening hearts, and easing conflict; sometimes a vital one.  But we can’t assume that they always will, just by being there; I’m afraid it will always be more complex than that.”