Euripides anti-war protest is a play for our times 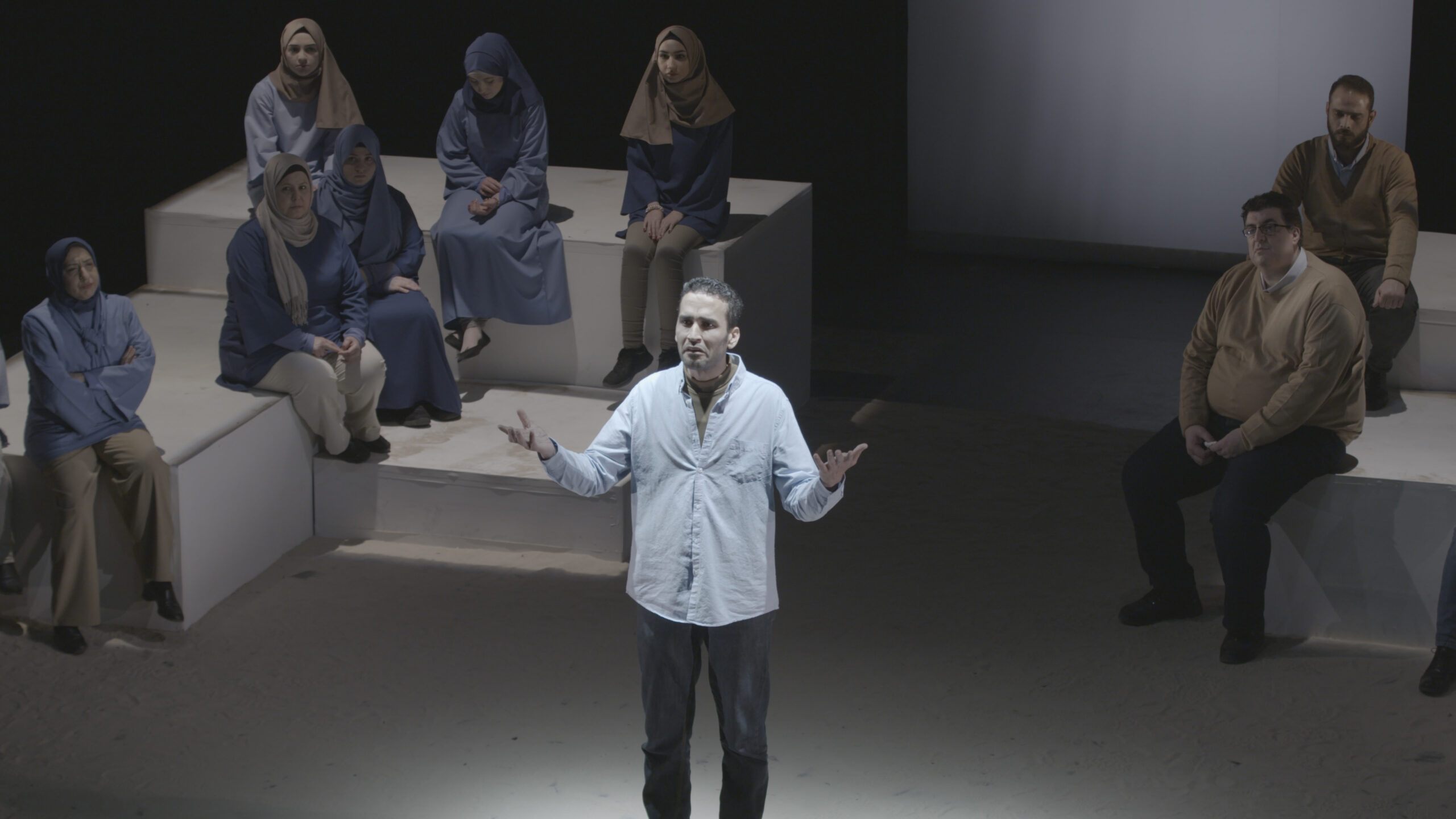 By Charlotte Eagar and William Stirling

“I lived in a cellar for two years,” he told the 750-strong audience. He’s tall, six foot four, with knife-edge cheekbones and eyes that used to be dark with despair. Mohammed was interrupted by a chorus of Syrian men and women, seated on blocks to either side: “No! No! You are too political!” The second chorus shouts back: “Let him speak!”

Mohammed told of searching for his father, in a suburb that had turned into a charnel house. “The children, the burnt women, the slaughtered families – I almost forgot about my father. My dead father…I almost forgot to grieve you, my father…”

Mohammed is not an actor – nor even a political activist. He was a tailor back in Syria. But as he told of being imprisoned and tortured for months on end, and all because he had the same surname as one of the revolutionaries, the audience were spellbound, many in tears.

Mohammed, 31, is one of the 28 cast members of The Trojans, our 2019 adaptation of Euripides’ great anti-war tragedy, The Trojan Women, the culmination of a year of therapeutic drama workshops. It stars a cast of Syrian refugees living in Glasgow, none of whom had ever acted before. It was directed by the Glasgow-based Victoria Beesley and the dramaturg Mariem Omari worked the casts’ own stories into Euripides’ masterpiece. Set at the fall of Troy, with the men all dead, and the women waiting by the Greek tents to hear their fate, the play shows what it means to be forced into exile, to see your country destroyed by war. It was co-produced with, and first performed at Glasgow’s Platform Theatre in Easterhouse, and brought to the Edinburgh Festival with the Pleasance. 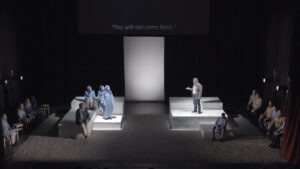 Sanaa, 37, is a schoolteacher from Deraa, who re-trained as a trauma psychologist after her children’s school was shelled; snipers shot at the children as they fled. Her now teenage daughter, Heba, tells this story on stage: “I’m a child! You are supposed to protect me!” She wailed.

Sanaa’s husband, a writer, was imprisoned for six months by the regime; she did not recognise him when she finally was allowed to visit the stinking jail. “He’d lost 20 kilos. His face was gaunt; his hair was wild. He wasn’t allowed to wash. He was covered in bruises; he was struggling to stand. Then he saw me and smiled, and I knew it was him!”

Nidaa is an elegant sixty-something mother of four. Her home in Syria was engulfed by a battlefield. Her husband Majid – a chef who has been cooking the workshops’ lunches – found their neighbour lying dead on their front step. Their daughters came to Scotland with them, but their lonely sons who fled military service by boat, are scattered over Europe. When Nidaa delivers the great soliloquy of Hecuba, Queen of Troy, on the husband, the home, the sons she has lost to the war, she speaks from the heart. At the play’s finale, when the casts’ children ran on stage, and Mohammed held aloft his six-month old baby Judith, grasping the Scottish Saltire in her fat little hand, the audience, most of them in tears, spontaneously rose to their feet.

Last summer The Trojans, got 4 star reviews and a blizzard of TV and  press coverage; Scotland’s then Minister for Europe, Migration and International Development, Ben MacPherson, made a speech at the end. There has been enormous demand to tour the play and we were invited to bring back to the Edinburgh Festival, and to take part in this year’s Edinburgh International Culture Summit. We were also running a new drama project, fortnightly workshops building a new play, written by the Syrians themselves: a black comedy about being a refugee.

All this was cancelled by Covid – yet another victim of the global pandemic.

The Trojans is the latest production of The Trojan Women Project, a combined community drama and advocacy programme for Syrian refugees we’ve been running since 2013 (www.trojanwomenproject.org).  The point is to provide a safe place for the participants; most refugees are lonely, miserable, very isolated. They’ve lost not only their homes, and often family members, but their jobs, their futures, and their sense of their own identity. They’ve also all undergone an experience that you could make a Hollywood movie about, but nobody cares.

We run regular workshops, where the Syrians can meet new people; they can build new friends, a new community for themselves. We also provide a creche for their children and a hot meal, cooked by Majid, a Syrian chef, one of the participants: sharing food is an important part of getting to know people. Most of our participants say they’ve found a new extended family through our projects.

Sharing their stories allows the Syrians to work through their trauma. By working the stories into the text of the play, and performing the plays at a high artistic level, the Syrians are literally given a platform to tell their stories to the world – because our second aim is to raise awareness of what Syrian refugees have been through, to flesh out those haggard faces you see on the news. I’ve been a journalist long enough to know that ‘Syrian refugee has terrible time’ is not news, but Syrian refugee puts on Greek tragedy and it’s really good – that gets on CNN.

Over the last seven years we’ve ripped off the Archers and set it in a Syrian refugee camp – and it was broadcast on BBC Radio 4 and BBC Arabic; we’ve produced Oliver! the musical in Arabic, with a junior cast of Syrian refugees; we’ve had kids in Jordan writing their own song about being a refugee – sponsored by the World Food Programme. All of these have been very successful projects but The Trojan Women’s unique power is that it was written about refugees, by Euripides, in 415 BC, as an anti-war protest. The cast are literally playing versions of themselves. 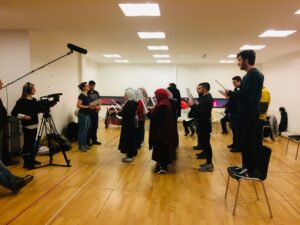 Our first play, 2013’s Syria: The Trojan Women, directed by the award-winning Syrian director Omar Abu Saada, was the result of a seven week project with Syrians in Jordan; it received global news coverage. In 2016, we toured Queens of Syria round the UK, with half the original cast, in a reworked adaptation, directed by the UK’s brilliant Zoe Lafferty, in a co-production with the Young Vic and Developing Artists. After a tsunami of publicity, we had full houses and standing ovations every night, and demand for tickets was so high, that we had to hold an extra Gala Night at the New London Theatre for 1200 people: Kate Blanchett, Julie Christie, Dames Diana Rigg and Harriet Walters, and Anna Chancellor all came to see the play.

It was clear by 2016 that the Syrian refugee crisis was moving to Europe.  And so, since then, we have concentrated our main attentions over here – although we still have a small children’s project running in Jordan.

As part of the project’s advocacy strategy, we make documentaries about most of our projects, and film the plays: we have always had a lot of demand for our work, but plays are expensive to stage; film, once it is made, is much more portable. Our films are regularly screened both at festivals and at universities over much of the world. Queens of Syria – our first documentary, not the play, which confusingly has the same name – won many awards.

The great worries for producing this project always are: will we get enough people, will they find it helpful, and will we get enough money.  Most of our funding comes from private donations and foundations, with chunks from the communications departments of the UNHCR and Oxfam. The Trojans was also part-funded by Glasgow City Council and the Scottish government. As for participants, we found the Syrians in Glasgow and Aberdeen – where we ran a creative radio play writing project – through the respective councils, and a brilliant Glasgow NGO called Refuweegee; in Jordan, we initially found participants through Oxfam and the UNHCR. After the project starts, the rest come through word of mouth.

The final worry, but the least of our problems, is will the performance be any good. So far, every time the cast has transcended our expectations; with the Trojans, the dress rehearsal was a total shambles – not only did the cast not know their lines, they couldn’t even remember where to stand. I gritted my teeth as a BBC cameraman who filmed the show said kindly, as he left, “it’s nice to have aspirations.” But 24 hours later, on the Opening Night, the cast totally slammed it: the audience in floods of tears, rising to their feet in the first of The Trojans many standing ovations.

Each time we produce The Trojan Women, it’s different.  Back in Jordan in 2013, freshly war-wrenched from their homes, our original cast were in shock, a desperate limbo. By the time we toured the UK, with the Young Vic, as Queens of Syria, in 2016, they were angry the war was still carrying on, and that rage and despair gave their performance power. 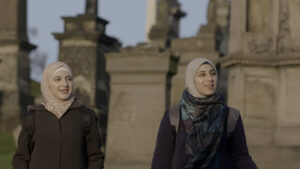 In Glasgow – with a cast re-settled, housed, their children in schools, the play was different again: the cast had hope; they love Glasgow – apart from the weather – and are starting to rebuild their lives. Mohammed fell in love, hiding in the cellar; he and his wife have now had two babies. Nidaa has had a new grandchild; she hopes her sons will be able to come soon. Sanaa is requalifying as a psychologist at Strathclyde University; her husband  is now with her, and is publishing Arabic children’s books so that refugee children don’t forget their roots;  their own children are at a school where nobody shoots at them, and the sunflowers and jasmine Sanaa has planted in Milton of Campsie are thriving.  And hopefully, once this virus is beaten, we will be able to tour The Trojans once more and perform the black comedy the Syrians have been writing. God knows, this year has provided enough material.

For more information on The Trojan Women Project visit www.trojanwomenproject.org

Charlotte Eagar and William Stirling, Sana’a Al Froukh and Essam Rabih all contribute to the Special Edition. The Trojan Women Project is part of the Special Digital Performances strand of the Summit revealed on 22 August.