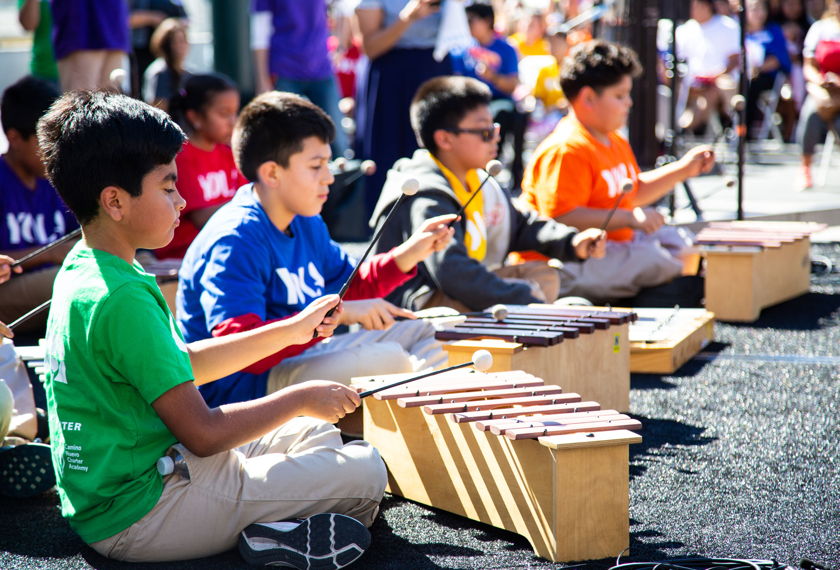 Author and journalist Mark Fisher explores the impact of access to music participation with Assal Habibi, Assistant Research Professor of Psychology at the Brain and Creativity Institute, University of Southern California.

Being a teenager from a deprived background must be especially hard during the pandemic. But one such group of youngsters have had an advantage. They’re members of YOLA, the youth orchestra run by the Los Angeles Philharmonic, and, amid the stress and isolation of the lockdown, they have been using their musical knowledge to enjoy impromptu jams on Zoom.

“Music is giving them a space to be distracted from the news,” says Assal Habibi. “They rely on the friendships that depend on playing music together.”

Habibi is not your average cheerleader for the arts. You’ll typically find her at the Brain and Creativity Institute at University of Southern California. In her role as Assistant Research Professor of Psychology, she studies the way life experiences affect the structure of the brain and, with it, our cognitive abilities and social development.

When, seven years ago, the LA Phil invited her to observe its class of six-year-old YOLA recruits, she accepted the task with due professional scepticism. “It is unique for an orchestra to collaborate with a scientific institute,” she says. “We didn’t say we’d come in and find benefits of music, we said, ‘We’re going to publish whatever we find.'”

The LA Phil was taking a risk and the evidence could have gone either way. “At the beginning it was chaos,” she says. “They were six year olds with violins hitting each other.”

Like Scotland’s Big Noise, the scheme is modelled on Venezuela’s El Sistema, a pioneering programme that gives intensive musical training to children from vulnerable communities. Its best known graduate is the conductor and violinist Gustavo Dudamel, who is also music director of the LA Phil.

Advocates believe that by learning an instrument and playing together, young musicians develop the discipline, self-esteem and social skills that will help them in later life. That is the theory. Habibi has spent the intervening years studying the children’s developing brains to see if it is born out in fact.

To get a sense of how their brains were developing, she recruited two further groups of 25. One was part of a community sports programme and the other, the control group, were not signed up to any organised out-of-school activity.

She tracked academic skills such as reading, memory and maths, as well as social skills such as empathy and compassion. Even adjusting for environmental factors, the evidence has convinced her of the benefits. On balance, the young musicians out-performed the other groups. That the sports players came second only reinforces the value of shared activity.

The earliest changes she observed were in the brain’s auditory processing systems. In the YOLA musicians, the temporal cortex, which has the job of sending information from the ear to the brain, was quicker to mature. That is what you would expect, but after two or three years, she also started to observe changes in social behaviour.

“Children who are more synchronised in drumming with another person are also more social towards that person and more willing to share their belongings with them,” she says. “It’s a simple task but it shows that synchronicity is part of evolution and probably has something to do with the role of music in creating social cohesion.”

On average, the YOLA children scored higher on empathy tests and were better at judging the emotional states of others. “There is a magical emotional moment when musicians play together,” she says. “They look at each other and you presume they are skilled in reading emotional content from the face and movement. This is also true for the kids in our study.” 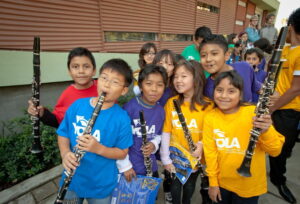 She fleshed out the lab results with observations from parents, who reported less aggression, less hyperactivity and more cooperation at home among the musicians. This translates into a more accomplished record at school and, you might suppose, better chances of success in later life. With the help of neuroimaging, Habibi observed a matching engagement in the areas of the brain associated with decision-making and planning. “It seems there are neuroplastic changes in their brain at an early age that correspond to their better abilities,” she says.

She’ll be talking about her findings in the Culture and Education strand of the Culture Summit joined by Elsje Kibler-Vermaas, from the LA Phil’s education department, and a 13-year-old musician whose life has been transformed by the programme, and in a webinar on Tuesday 25 August.

Music should be a pleasure in itself, Habibi argues, but her results suggest it is also a “tool to use for processing emotion.” She believes every child deserves access to such a tool. “Our results show it gives them skills that are important for their success in life, academically and socially. Art and music education shouldn’t be a bonus for some kids who can afford it. It should be part of a curriculum that we offer for whole-child development.”

With thanks to the Los Angeles Philharmonic Association for use of the photos.