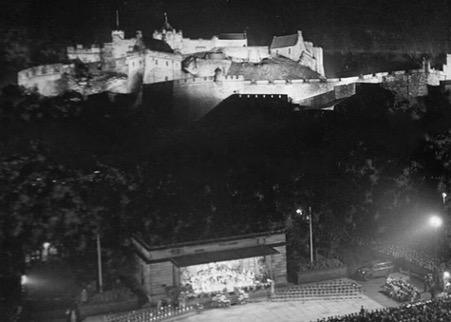 August 1947 and the residents of Edinburgh awaited a verdict with breathless anticipation. They had transformed their solemn grey city with bright decorations, floral displays, and flags to welcome performers and visitors from around the world to the inaugural Edinburgh International Festival. The summer days were bathed in a continuous sunshine that helped to lance the deep gloom of their recent years, and the air was filled with excitement once again. To complete the spectacle of the grand opening, they had requested floodlighting to illuminate the timeless castle that sits above the city.

Yet during that time of careful rationing such atmospherics were deemed an indulgence by the Minister for Fuel and Power, who denied the request. In the days that followed, the Minister found his office inundated with hundreds of letters and telegrams pledging the use of private coal rations of citizens across the city, meaning that when the first Edinburgh International Festival opened it did so beneath Edinburgh Castle lit up by this touching act of community.

Seventy-five years later the founding vision of the Edinburgh International Festival has renewed value, reuniting the community of artists and art lovers – both local and global – after the economic and social impairments of a global pandemic, and offering the skill of performers and the imagination of artists as a riposte to the divisions and destruction of conflict.

The acclaimed festival celebrates its milestone with an impressive programme that blends established virtuosos with emerging stars across a wide range of disciplines. Among the many highlights, Coppélia by Scottish Ballet blends real-time filming and live performance to retell the classic story for the digital age; The Akram Khan Company’s The Jungle Book Reimagined, turns Mowgli into a climate refugee of a near future world; and Princess Nokia brings New York style and swagger to the Leith Theatre.

Also present for the first international festival were a group of uninvited theatre groups who staged their own productions and, in doing so, spawned the Festival Fringe. After the cancellation of 2020, and a cautious scaling back in 2021, the behemothic grassroots festival is back to turn every venue and stretch of grass into a space for comedy, dance, and music, and to make Edinburgh in summer a feast of eclectic entertainment.

To mark its own seventy-fifth anniversary, the Fringe has also launched a new vision, hailed as a “new dawn for an iconic cultural event.” by the President of the Edinburgh Festival Fringe Society, Phoebe Waller-Bridge. This new vision will take the best aspects of the Fringe – its commitment to supporting emerging artists and welcoming all performers with an ethos of equitability – but will enhance the experience by eradicating unfair working conditions, widening access to the festival by embracing digitisation, and announcing that the festival will be a carbon neutral event by 2030.

The city will also host the literary world through the Edinburgh International Book Festival. Among the hundreds of authors and poets participating this year are Nobel and Booker Prize winning authors, acclaimed poets, and guest speakers such as the Scottish First Minister, Nicola Sturgeon, who will also interview actor Brian Cox about his life on the Scottish stage and his role in television hit series Succession. The Edinburgh International Book Festival also makes ample room for a fascinating series of non-fiction events, as writers and experts discuss philosophy, politics, economics, and other important issues of today. Spanning three weeks of August the Book Festival ensures that there is something for every reader in this expansive catalogue of events.

The Edinburgh Art Festival offers pictorial examinations of Scotland past and present through exhibitions such as Counted: Scotland’s Census 2022 at the National Portrait Gallery; National Treasure: the Scottish Modern Arts Association at the City Arts Centre; and The Invisibles an exploration of the layered erasure of indigenous culture at the Sierra Metro. Additionally, a major retrospective of the life and work of Dame Barbara Hepworth is being hosted at Scottish National Gallery of Modern Art.

In a partnership between Edinburgh Festival Fringe Society, the Federation of Scottish Theatre, Scottish Music Centre, and Creative Scotland, the Made in Scotland Showcase presents Scottish dance, theatre, and music on an international stage with a programme that makes room for mystery, mischief, and provocation.

Taking us out of the theatre and away from the gallery is Dandelion, a six-month creative celebration of the concept of ‘Sow, Grow, Share’ – growing not just food, but also community and knowledge of how to develop a more ecologically sustainable lifestyle. The project brings together artists, makers, scientists, performers, and technologists to present events and programmes across Scotland – urban communities as well as rural ones – with the hope of re-connecting with the Harvest as a significant annual cultural celebration.

Dandelion is a part of UNBOXED, a nationwide celebration of creativity with a series of multi-disciplinary events inspired by science, mathematics, the arts, and technology, taking place across the UK. A second UNBOXED project visiting Edinburgh this August is Dreamachine, an immersive experience created entirely by light and music and taking place behind closed eyes, making your own brain an active participant of the experience, creating a personalised response that is completely unique for each visitor.

As the city prepares itself for its seventy-fifth year of hosting cultural festivals, our majestic Castle – spectacularly irradiated by the Edinburgh Military Tattoo – frames a range of events and performances that have grown to be almost unmatched in their breadth and variety. The community of visitors too is ever-growing, and excitement is beginning to fill the air once again.

It was this unique atmosphere that led to the foundation of the Edinburgh International Culture Summit. With thousands of artists, arts leaders, and culture Ministers visiting the city each year, the Summit was designed to harness this international convening power, to make the case for the arts against a backdrop of cultural celebration, and to inspire positive change through arts policy and investment. We are thrilled to host our first in-person meeting in four years with a programme titled, Culture and a Sustainable Future, our exploration of education and the environment that has formed in response to the COVID-19 pandemic and COP26.

Building on the success of a digital Summit Special Edition in 2020, we plan to incorporate more ways to engage with as many people as possible and share performances and keynotes. Follow us to learn how you can get involved in Summit 2022!